After a fantastic Summer with berries in abundance in the garden, Autumn brought a new kid on the block...plums (and masses of them). We planted two pear trees and a plum tree three years ago and up until now the plum tree hadn't flowered. This year it well and truly made up for this and when we left for holiday in August it was laden with green fruit. 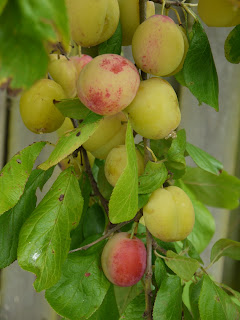 Coming home a week later I was excited to see the fruit ripen and by mid-August it was time to pick...and pick... and pick! 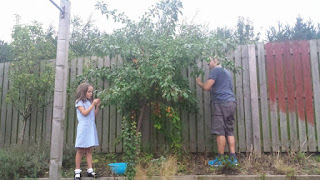 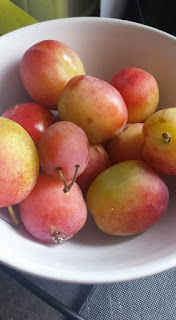 In fact, there was so much fruit that I even bartered some for a bottle of wine! 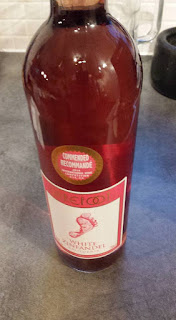 So, what to do with plums? Well, a good crumble never goes amiss and plums are delicious. I also had some raspberries from the garden that I had frozen and the idea of a plum and raspberry crumble seemed even more delish!

I have a tried and tested recipe for crumble but had ready another gluten-free blog (that I really like) and the title "The best crumble you will ever eat" had caught my eye. Now I've eaten a lot of crumbles, could this statement actually be true? Well the answer is yes! The topping is not a traditional style, but my gosh it's good! If you want to try it out for yourself, here's the link. I just substituted the Italian plums for good old fashioned Victoria plums and a big handful of raspberries thrown in for good measure!

I know this challenge was about making my own recipes, but in this case "If it ain't broken don't fix it".

So we are sticking with courgette for this next challenge (as I can only keep so many in the fridge) and this time I am going for something sweet.

After a wee peruse through their recipes I got some inspiration and trialed my own recipe for a gluten-free (and dairy free) courgette and apricot cake. It's been taste tested this morning and got the thumbs up. The cake itself is very moist but not too sweet, and compliments the sweet frosty topping beautifully. 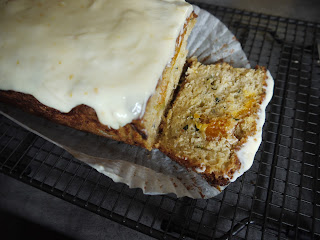 Method
1. Heat over to 180oC.
2. Oil and line a 1kg loaf tin (or I quite like to use the cake liners which you can get in most Supermarkets now).
3. In a bowl stir together courgettes, sugar, oil, eggs, orange zest, vanilla ans apricots.
4. Gently fold in flour, baking powder and xanthum gum until only just combined.
5. Scrape into the tin and bake for approx. 50mins until a skewer inserted comes out clean.
6. Remove form tin and cool on a wire rack.
7. To make the topping gently beat the cream cheese, icing sugar and orange zest together and spread over the top.
8. Keep chilled in the fridge.

The first EATS challenge uses new potatoes (which are in abundance in the community garden at the moment, eggs (which my chooks are happily laying and also in abundance) and courgette (which are going mad in my greenhouse!). Simple but very tasty ingredients.

For me, these three ingredients are crying out to be put into a delicious fritatta (or Spanish tortilla). So what's a fritatta? Well basically it's like a cross between an omelette and a crustless quiche. A set egg dish with lots of added ingredients.

I conjured up this recipe after forgetting my lunch once at work and thinking that it would just be soup on the menu for me as I couldn't eat the bread from the local sandwich shop. As it turns out they were selling wedges of fritatta which was absolutely delicious alongside their homemade soup. After dissecting what was in the fritatta I thought "I could make that" and I did. I took a couple of attempts to get my recipe just right and I have a secret ingredient in mine (which I may just share with you).

As well as being gluten/wheat free it's also a perfect dish to have when veggie friends come for lunch.

Added combinations which are yummy (feel free to mix and  match or make up your own)
Courgette and goats cheese
Mediterranean veg
Swiss chard or spinach
Peas or sweetcorn
Chunks of ham or chorizo.

Method
1. Cook the potatoes in their skins until just cooked. Leave to cool and then slice (you can slice then thinly however I like them a wee bit chunky).

2. Prepare the vegetables (in this case thinly sliced courgettes and onions). In a frying pan add a splash of olive oil and gently cook the vegetables until soft. 3. In a bowl mix together all the ingredients and season. If using cheese, mix through small chunks. 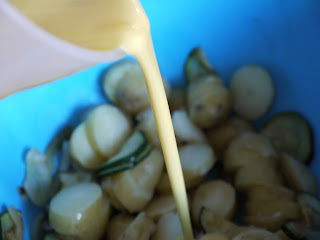 4. Add another splash of olive oil to the frying pan and put on a low heat. Gently add the mixture until evenly distributed in the pan. If desired, add more cheese to the top.

5. Cook on a very gentle heat. Every so often run a knife around the edge of the pan. 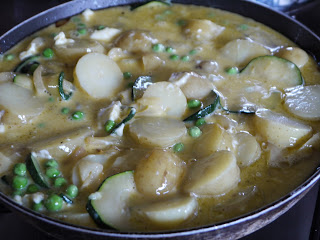 6. Once the fritatta starts to bubble at the edges, put under a hot grill to cook/brown the top. 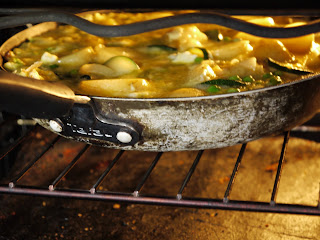 7. When ready turn out onto a plate. Add another plate on top and flip it over so the browned top is back at the top.

8. Cut into wedges and enjoy with a fresh salad. 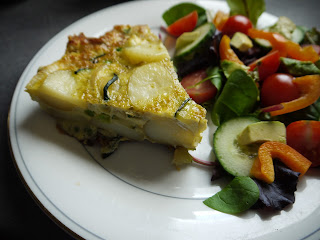 Come Dine With Me Grand Finale

The long awaited round three of CDWM took part last month, and it was the turn of the Coopers to host. I think it is safe to say that Mrs Cooper wasn't quite as excited as Mr Cooper at the prospect of the mammoth cooking challenge, and it was Mr Cooper who led their stage of the challenge. I believe quite a few souffles were tried and tested before the last menu was revealed, and what a menu it was:


Cod and samphire dressed in a lemon, butter and caper sauce topped with prawns
Rack of lamb with fondant potatoes, spring vegetables and lamb jus
Chocolate soufflé and raspberry ripple ice cream
The gauntlet was firmly laid down with this spectacular menu and Mr C was in it to win it!
Now the Cooper's didn't just have a menu to stun, the location of their house also impresses. Nestled under the arches of the Forth Railway Bridge you have views across the Forth and also can sneak a peak of the new bridge being built. A wee photo opportunity whilst the canapes were served up (yes...canapes on top of that delightful menu). 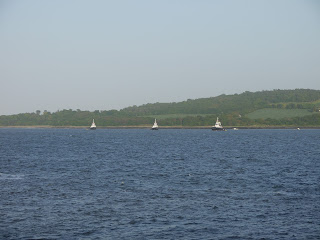 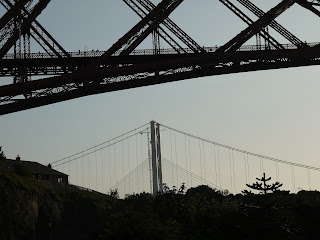 If the canapes were the taster of things to come then I was looking even more forward to the menu. Risotto balls and haggis balls with accompanying dips. Yum! 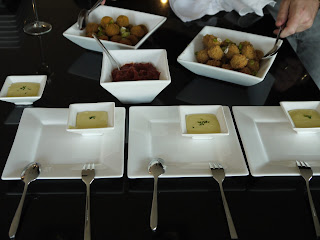 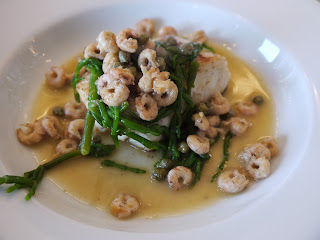 Then the main (this had to be my favourite course of the evening)... 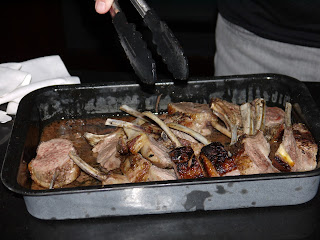 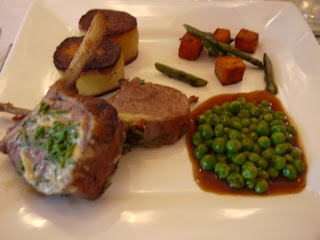 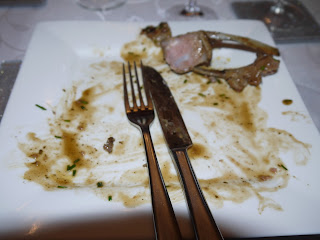 ...and finally desert (yes they did rise!) 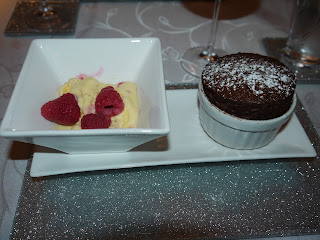 We finished off a delicious meal with cheese and homemade crackers (sadly not wheat-free but to be honest I was pretty stuffed anyway!). 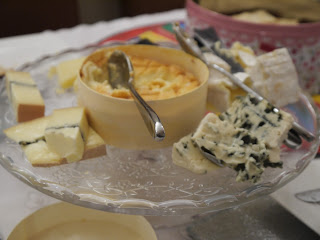 As expected the Coopers were delightful hosts and coupled with the Storrars we had some cracking company for the evening. Food and good company, what more could you want for? Oh yes, the CDWM Champions title would be nice so onto the scoring! 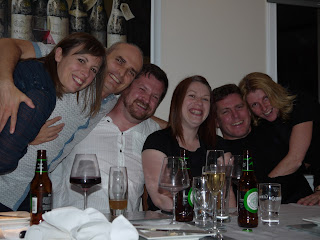 Scores were tallied and big drum roll.....drrrrrrrrrr....we won. Won by only half a point! 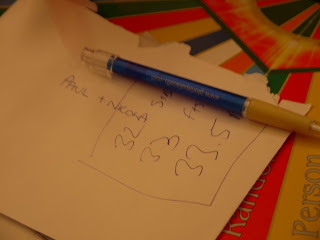 For me who is so passionate about food and puts so much love and care into every meal that I cook (not just in a competition) this was a very big deal. The standard of all three meals was exceptional and to come out on top was a lovely feeling. Apparently we scored an extra half a point by Mr C for our oven disaster, lucky he did! I was disappointed to only score a seven from one of our guests, but I guess it gives a taste of what it must be like for professional chefs when food critics analyze a menu and give feedback on it. Your palette may not actually suit everyone's taste.

This was another wonderful culinary adventure to put alongside my Britain's Best Dish adventure and River Cottage adventure. What next?
at 19:08 No comments:


In keeping with the rhubarb theme of the last post, rhubarb is very much the dominant fruit in the house at the moment. Having picked a load of the stalks to make jam, the rhubarb patch still looked untouched...so I set about making another batch...then another batch...

Five kilos of rhubarb later and there was still loads! So what to do with all the jam? Well I am busy raising funds for a fantastic local charity called LoveOliver so the jam is now for sale. After a scour of the internet to check the going price for a good quality jam I have settled for £4 a jar. A bargain!

At the moment I have rhubarb and ginger (a classic), rhubarb and rose (apparently hard to find) and my own "new kid on the block" recipe; rhubarb, strawberry and vanilla. 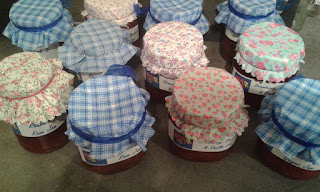 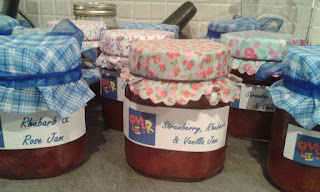 I was a bit skeptical about rhubarb and rose but I have to say for now it's a clear winner. Subtle with a hint of rose I've enjoyed it in porridge and on homemade pancakes.

So if you'd like to sponsor me in return for a jar of jam I am only too happy to oblige. The first event is on the 11th June; my first attempt at a triathlon (eek). I will also be cycling 75 miles of the Fife Coastal path from the Forth road bridge to Tay bridge in July (double-eek).

All Comments
Tweets by @eatwithoutwheat